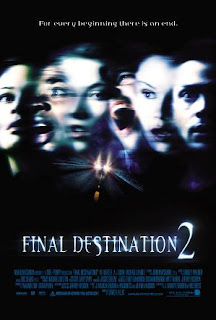 Before we get into the movie itself, I just want to say that this movie has an awesome poster. Seriously, look at it. The use of colour and blending is really striking and visually appealing. Certainly far better than the Brazilian DVD cover… how did they ever consider that better than the official movie poster?

Anyway, moving on. Final Destination was an unexpected success, and so New Line Cinema was eager to make a sequel. Unfortunately, the original crew was unavailable at the time so an almost entirely new production team was brought in. This meant that the film was given completely different writers and a new director, David R. Ellis. This was a bit of an… odd decision to say the least. David R. Ellis has a long history in Hollywood as a stuntman and coordinator, as well as a second unit director. His one full directorial credit at the time was Homeward Bound 2: Lost in San Francisco… or, as I remembered it from my childhood spent watching Homeward Bound all the time, The Exact Same Movie as Before. Since Final Destination 2 his major credits have been Snakes on a Plane, The Final Destination and Shark Night 3D… his CV is full of largely trashy and gratuitous horror films. With the benefit of hindsight, you can probably figure out for yourself that he wasn’t exactly a great choice (although, to be fair, original director James Wong has put out some seriously shitty movies in his time, including The One and Dragonball: Evolution). Also, on a related note, it turns out that David R. Ellis passed away in January, which I did not realize until now. He wasn’t exactly a director I liked, but I appreciate the work Ellis put into film during his lifetime (look at his credits on IMDb, he worked on some big films like Scarface).

Anyway, the only returning cast from the first movie are Ali Larter’s Clear Rivers and Tony Todd’s Bludworth – both good characters in the previous film, although the decision not to bring back Devon Sawa’s Alex Browning really hurts Clear’s character. The chemistry between Clear and Alex was part of what made these two characters interesting in the previous film, and by cutting Alex out Clear becomes considerably less engaging – in this movie she is less of an independent figure and more of a poor attempt to make a badass chick. Aside from Clear, the two main characters are AJ Cook’s Kimberly Corman and Michael Landes’ officer Thomas Burke. Unfortunately, neither character is anywhere near as engaging as the main characters from the previous film. I mean, was somewhat sympathetically inclined towards Kim and Michael, but neither character was particularly well-acted or had much depth at all. In fact, the only other new character I even had an inkling of sympathy for was Rory (Johnathan Peters), a hopeless drug addict who’s pretty much resigned to death. However, Rory’s really the exception here: pretty much every character in Final Destination 2 is underdeveloped (if developed at all) and are basically just there to act as cannon fodder. 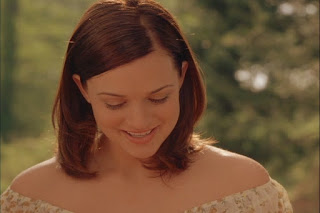 At least Kim is easy on the eyes. 😉

Okay, well they dropped the ball on the characters… how’s the story then? Well I’ve got some good things to say here at least. For one thing, it’s obvious that there was at least an effort put in to break the 3-step Final Destination formula of “1) Premonition of disaster 2) Try to escape death 3) Everyone dies” which basically every movie in the franchise follows. For one thing, Final Destination 2 shakes up the formula slightly – Death is working in reverse, trying to clean up all the loose ends caused by the characters in the last movie. This element is revealed about midway into the film and is actually quite an interesting connecting twist, although it could have done with some better integration. The other major new element is the idea that the characters can successfully cheat Death through certain means, in this case creating a life which would not have existed otherwise (and therefore making Death’s former plan out of date). This is actually an element that I really liked, and one which I wish they would reintegrate in future installments. I hate how they always kill off the characters at the end of these sorts of films, it’s basically a big middle finger to the audience saying “oh, did you care about those characters? We didn’t, they’re just there to die.” That aside, if the characters in this film were better done then this particular change might have been even better to Final Destination 2 overall, but as it is it’s a cool expansion of the concept.

However, while there are some changes to the formula, Final Destination 2 is largely just a rehash of the first movie, only with more of an emphasis on the death scenes. That said, the first 45 minutes work fairly well, but feel like they only exist to get us to the aforementioned death scenes. Compare this to the first movie where everything, up until the final 20 minutes, felt very natural and gelled together well – the character development was considered just as important as the death scenes. Luckily, while Final Destination 2 emphasizes the deaths more, they really pull out all the stops on them. First off, the opening disaster is FREAKING AWESOME. Watch this:

Holy shiiiiit… say what you will about David R. Ellis, but I’m sure that this sequence was totally his work. As a second unit director he was responsible for such classic action scenes as the car ambush scene from Clear and Present Danger or the highway chase in The Matrix Reloaded (both of which were the only real highlights from their respective films), and you can really tell that that’s the case here. Of course, the scene is totally ridiculous (cars turning into nuclear bombs when their roof hits a trailer), but undeniably spectacular as well. Of all the opening disasters in the series, this one is really the visceral highlight for quite some time.

Aside from the opening disaster, Final Destination 2 is also the point where the individual death scenes themselves started getting very creative and really become the crux of the films themselves. Consequently, this also marks the point where the series really started to move towards horror/slasher rather than thriller, although it hasn’t abandoned its roots completely yet. In any case, this entry features some really wicked deaths – while they aren’t set-up as well as they were in the previous film, the deaths themselves are wildly creative and very darkly funny (highlights at 0:55, 2:20 and 2:43):

So what is my assessment of Final Destination 2? Honestly, while I think the deaths in this one are pretty cool at times, it’s the last 45 minutes that I don’t particularly like. The film was being pretty clever up until that time, at which point it basically becomes a montage of deaths strung together weakly. In all, while it has its moments and is certainly not the worst movie in the series, Final Destination 2 is probably the one that I enjoy the least – it really had some promise, but it doesn’t come to fruition in part because it has the weakest cast in the whole series. I’d recommend it if you’re a fan of the series, but if not then the 2 videos I posted here should provide all the highlights you need.

Be sure to come back soon for Part 3 of this retrospective: Final Destination 3!